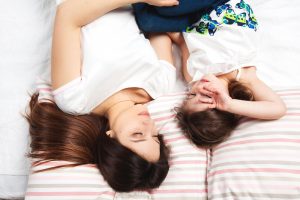 So your toddler has always been a terrible sleeper. To make things easier and to get some sleep, you decided to co-sleep. Bed-sharing worked well for a while – it was easy to get your baby back to sleep with a feed and eventually get back to sleep yourself, but now it’s turned into a nightmare with your 17-month-old toddler waking multiple times for a feed and nobody is getting any sleep.

I think it’s almost indisputable that a 17-month old should be able to sleep for more than a couple of hours, if not 45 to 60 minutes without milk. Therefore, we can say that this is a behavioral waking as opposed to a physiological, nutritive waking that a much younger baby might be having. We generally say that after about six months, they can be down to one feed, if not none. 17 months? He should be able to cope without waking that many times for a feed.

Yes, it’s going to be easier to get him back to sleep with the breastfeed, however, it does mean that he’s waking for that and that’s behavior that now we might need to work on having slow down so that we can all get a bit more sleep at night. What I would be saying first up is perhaps moving him to his own sleep space – his own room or perhaps a cot in your room, as long as he has his own sleep space.

Moving forward, we’re going to hope to get some sleep using a different technique. That would involve you being in separate sleep spaces. Then, as hard as it’s going to be, you need to respond to each night waking exactly the same way every single time.

I would be suggesting that you do something where maybe you go and sit next to the cot and you pat him or you pat the mattress to encourage him to lie back down, reassure him that you’re there, everything’s fine. Then gradually doing less and less of that. We can, of course, help you find what solution suits you, but I just want you to focus on doing something less. Popping him back into his cot – yes, he’s going to wake just as much. Yes, it’s going to take longer than just giving him a quick feed, but the incentive to wake is therefore not as great because it’s just not as awesome to have Mum sitting next to my bed as opposed to getting a sweet hit of breast milk. It’s just not the incentive there anymore.

Are you TIRED of being so tired?? We can help!